It’s October 1980. After finishing this Volume, I was struggling to get much of an angle on it. The stories in here aren’t bad; in fact the average quality is pretty good. Unlike a lot of the other thematic “grab-bag” collections, the stories here span a much smaller publication date range – from 1980 to 1985. That’s right in the middle of a pretty well-regarded run for Judge Dredd, largely scripted by John Wagner and Alan Grant and with a steady stable of amazing artists like Carlos Ezquerra, Ron Smith, Ian Gibson and more. 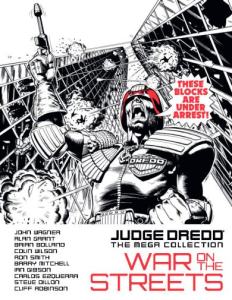 But the stories are all fairly straightforward and provide an early focus on the Judges as a procedural law-enforcement organisation. A few times during my read through these stories I had the thought that you could see these as the sort of plots and stories that they might have tackled in a 70s “cop show” TV series of Dredd (obviously without the visuals of entire city-blocks going to war against each other!). A lot of the other thematic Volumes in the Mega Collection pull the focus away from Dredd and the Judges to the insane citizens or bizarre villains, while War on the Streets provides a collected snapshot of the Justice Department methodically solving various cases, dealing with gangs and doing the main job they’re supposedly there for. There’s a very “case of the week” feel to the collection, and in retrospect (and at a very long stretch indeed) the stories here when read back-to-back feel like a precursor to the storytelling style Wagner will adopt in The Pit (1995) (a long way down the track for this blog).

It speaks to the flexibility of Judge Dredd that for a series that’s one-line summary is basically “future cop in crazy sci-fi future”, procedural crime-solving is really only one sub-genre that the series tackles. Prior to The Cursed Earth (1978), the series was basically a different criminal or gang that Dredd dealt with by shooting them, while the stories here have a similar by-the-numbers feel but with a greater level of maturity in the storytelling. Wagner and Grant have a much better handle on balancing plot with comedy, and really hitting some hard-edged moments. This collection demonstrates that a procedural approach to Dredd can definitely work, but I’m glad it’s not all the series does.

A quick look at the stories themselves then. The highlighted inclusion is the over-arching Mega-Rackets plot, which encompasses a bunch of 2-parters (and a solitary one-shot) dealing with a different element of organised crime in Mega-City One. Apparently the collection of similar stories was planned so that the notoriously non-speedy Brian Bolland could draw all five parts of the return engagement for everyone’s favourite alien superfiend in Judge Death Lives (1981), and Wagner and Grant just basically threw a bunch of quick ideas for criminal enterprises at the regular carousel of artists. The result is better than you might expect from that somewhat forced genesis, but Wagner and Grant keep things lively with some great characters, really dark moments and some light but connective plots that culminate in the bizarrely entertaining Mob Wars (1981). (I think this was what first got me thinking about Dredd as TV series – Mob Wars is such a season finale story!)

The Mega-Rackets ends up mainly showcasing Wagner and Grant as idea machines: citizens putting their loved ones into suspended animation as collateral for loans in The Body Sharks (1981); Umpty Candy becoming a street-dealt drug in The Umpty Baggers (1981); telepaths being used for criminal ends in The Psycos (1981). My favourite of the batch is probably The Stookie Glanders (1981), which takes the pretty dark premise that the sentient alien Stookies are being farmed, killed and turned into youth tablets for Mega-City One citizens and doesn’t hold back on it.

The other main story worth looking at for me is The Graveyard Shift (1983), which takes a look at the insanity of one night for the Judges in the Big Meg (another made-for-TV plot!). It’s a great idea for a story, and it’s actually surprising it took them 6 years to get to it. The dawning horror of the level of crime, death and destruction on an average night is well-played, and the final few panels really stuck with me. After the seven episodes of carnage we just saw, Dredd and his fellow Judges get 10 minutes in the sleep machine, and then head out to do it all over again.

Couple of other quick things that stand out – Block War (1980) provides a very meta epilogue to The Judge Child (1980) where the Council of Five (including the first appearance of Hilda McGruder) debate Dredd’s unilateral decision to not complete his mission. It also has the first titular Block War and has a fantastic depiction of the battle from from below by Ron Smith. West Side Rumble (1985) feels more like an Annual episode with its musical take on a Juve gang fight; and A Day at the Block Wars (1985) has a great twist on the theme by taking some cadets on an excursion to watch Dredd take down warring citizens.

War on the Streets provides a sampling of an important theme of Dredd’s world. Yes, the Judges are a totalitarian and fascistic force keeping the City under their control. But the City they are dealing with is a perpetual motion machine of chaos, violence and death. The Justice Department isn’t just the cliched bad guy. As these stories demonstrate, they are doing their jobs as they’ve been trained to do them. I like the collection as an indication of what one version of Dredd could be, even if it’s too narrow to ever be the entire focus.